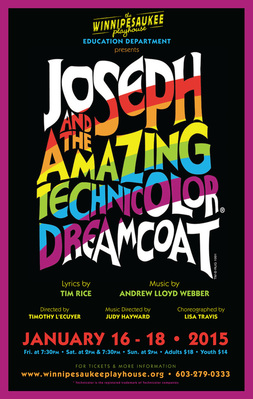 Joseph and the Amazing Technicolor Dreamcoat
January 16-18, 2015
​
The Biblical saga of Joseph and his coat of many colors comes to vibrant life in this delightful musical parable. Joseph, his father's favorite son, is a boy blessed with prophetic dreams. When he is sold into slavery by his jealous brothers and taken to Egypt, Joseph endures a series of adventures in which his spirit and humanity are continually challenged. He is purchased by Potiphar where thwarting advances from Potiphar's wife lands him in jail. When news of Joseph's gift to interpret dreams reaches the Pharaoh (wryly and riotously depicted as Elvis), Joseph is well on his way to becoming second in command. Eventually his brothers, having suffered greatly, unknowingly find themselves groveling at the feet of the brother they betrayed but no longer recognize. After testing their integrity, Joseph reveals himself leading to a heartfelt reconciliation of the sons of Israel. Set to an engaging cornucopia of musical styles, from country-western and calypso to bubble-gum pop and rock 'n' roll, this Old Testament tale emerges both timely and timeless. 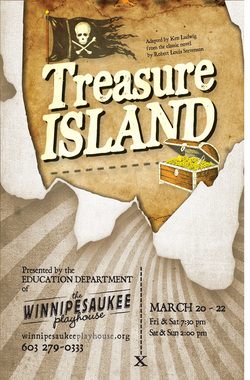 Treasure Island
March 20-22, 2015
​
Based on the masterful adventure novel by Robert Louis Stevenson, Treasure Island is a stunning yarn of piracy on the tropical seas. It begins at an inn on the Devon coast of England in 1775 and quickly becomes an unforgettable tale of treachery and mayhem featuring a host of legendary swashbucklers including the dangerous Billy Bones, the sinister two-timing Israel Hands, the brassy woman pirate Anne Bonney, and the hideous form of evil incarnate, Blind Pew. At the center of it all are Jim Hawkins, a 14-year-old boy who longs for adventure, and the infamous Long John Silver, who is perhaps the most famous hero-villain of all time. Silver is an unscrupulous buccaneer-rogue whose greedy quest for gold, coupled with his genuine friendship with Jim, cannot help but win the heart of every soul who has ever longed for romance, treasure and adventure.​ 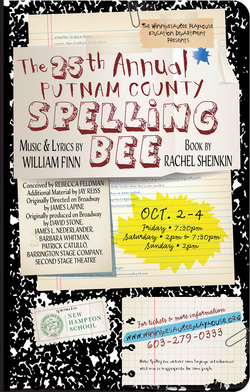 The 25th Annual Putnam County Spelling Bee
October 2-4, 2015
​
Winner of the TONY and the Drama Desk Awards for Best Book, The 25th Annual Putnam County Spelling Bee has charmed audiences across the country with its effortless wit and humor. Featuring a fast-paced wildly funny and touching book by Rachel Sheinkin and a truly fresh and vibrant score by William Finn, this bee is one unforgettable experience. An eclectic group of six mid-pubescents vie for the spelling championship of a lifetime. While candidly disclosing hilarious and touching stories from their home life, the tweens spell their way through a series of [potentially made-up] words hoping to never hear the soul-crushing, pout-inducing, life un-affirming "ding" of the bell that signals a spelling mistake. Six spellers enter; one speller leaves! At least the losers get a juice box.